Copperton is a small town located at the mouth of Bingham Canyon, close to the Kennecott Copper Mine. In fact, the town was started by the Utah Copper Company as a city for its employees. The town's chapel was completed in the late 1940s.

The original design was pretty attractive, with the low steeple. I'm not sure the new steeples that have replaced it match as well.

The chapel and cultural hall are perpendicular to the rest of the building. The main entrance is at the corner of these two segments. While I've seen this floor plan before (like in the recently documented Lake Shore Ward), the carvings around the main entrance and chapel are unique. 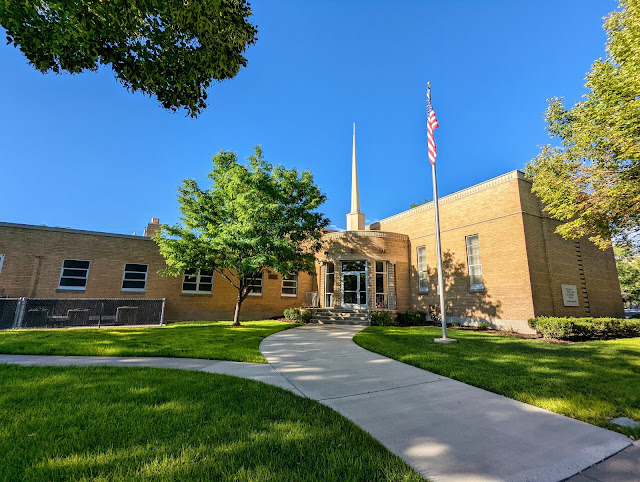 It's reminiscent of an art deco style, and some moon stones are carved into the pillars as well. 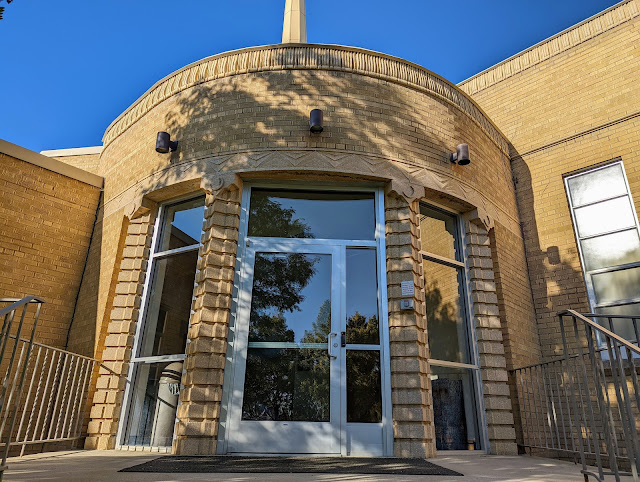 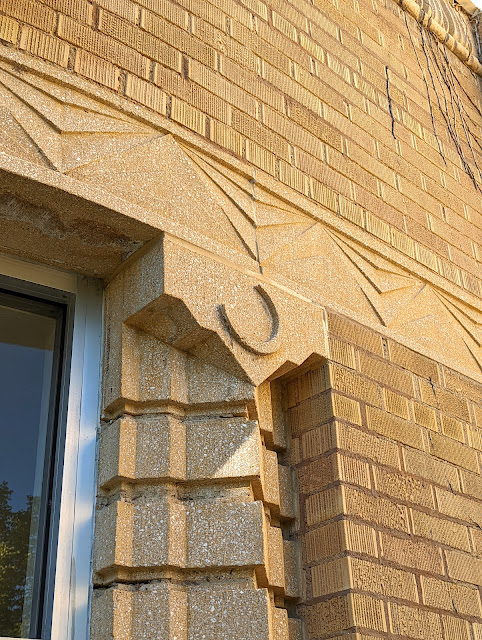 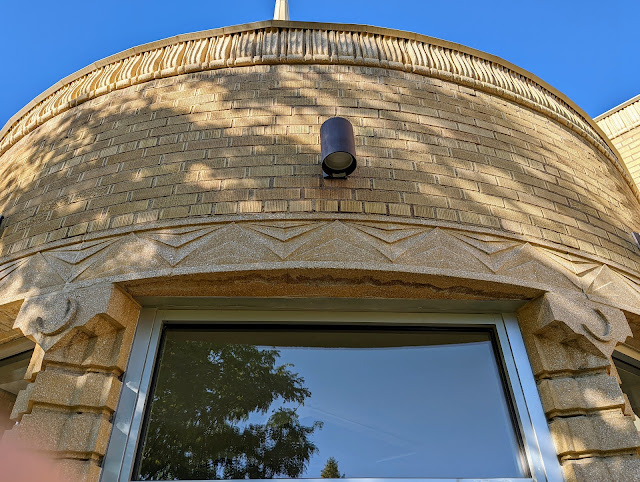 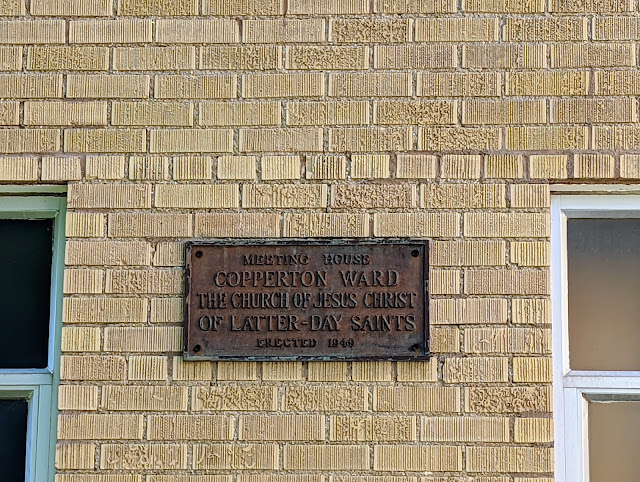 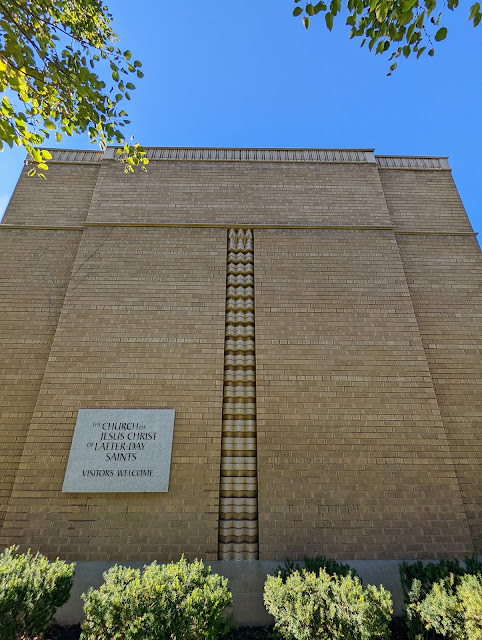 The Manila neighborhood was an unincorporated area of settlers on the benches east of American Fork. (The ward was named after the Battle of Manila, in the then-occurring Spanish-American war). It is now part of the American Fork city limits, but the ward built its original meetinghouse here beginning in 1891, finishing in 1897. 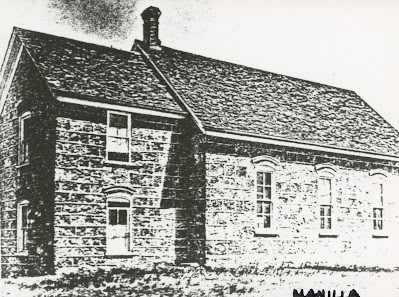 It's a simple structure, but it was well-built, and was used by the Church continuously until 2007 (with multiple additions and renovations, of course). In 2010 it was purchased and converted into a wedding and reception center. 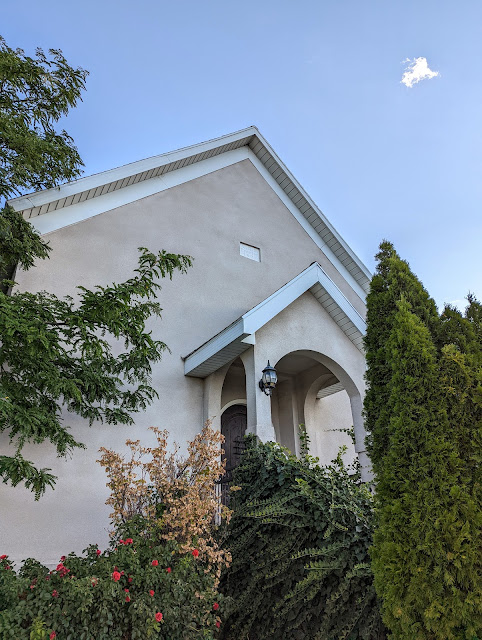 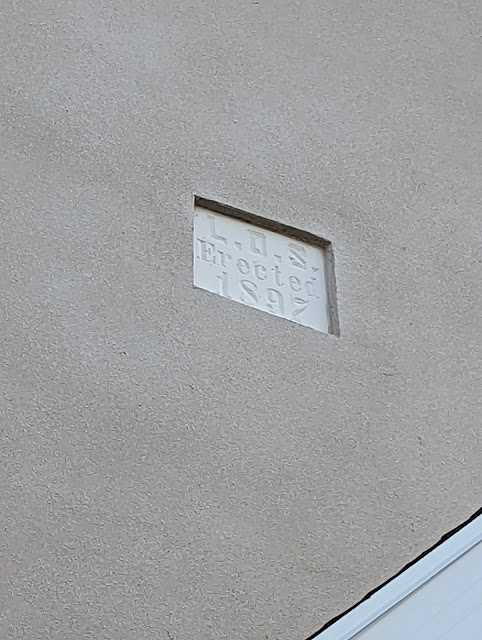 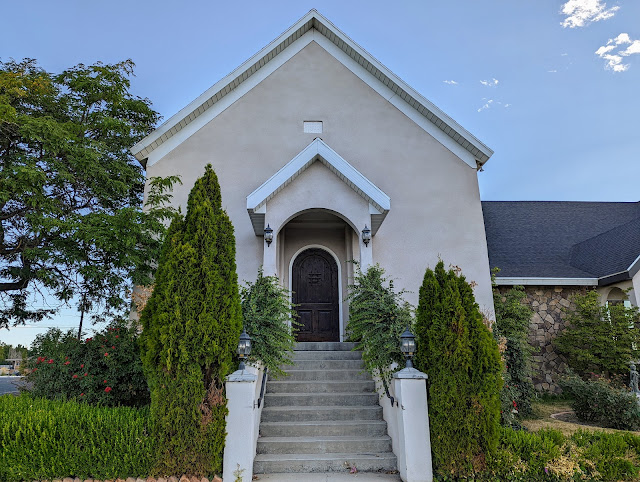 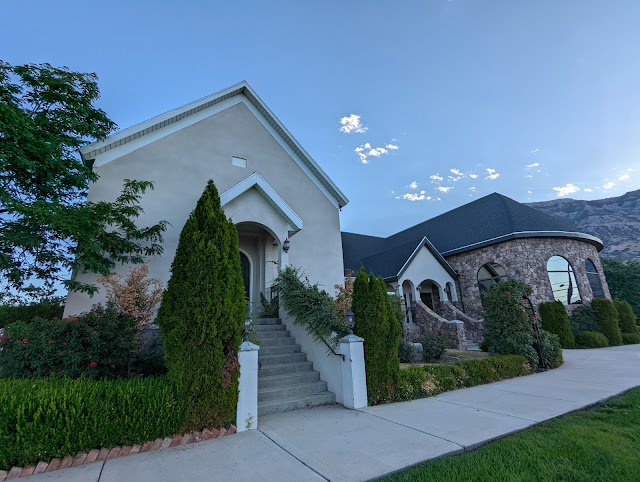 This post was originally published in July 2016. Given the recent vacation of the original building, I have updated and expanded this post.
The Church's seminary program began in 1912, but the institute program--the concept of having a gathering space and teaching classes near colleges and universities--came in the 1920s. Culturally, America was facing a reckoning at this time about what should be taught in public schools (including concepts such as evolution), and trends of the time seemed to indicate a decreased dependency on religious studies in the public education system. In 1926, the University of Idaho opened the first Institute of Religion, thanks in part to a local family that pushed to have an LDS student center near campus. Its building was completed in 1928. (That building was razed many years ago.)
The Logan Institute was the second to be built, in 1928-29. It was dedicated in March 1929. Originally, the building was largely a chapel with stained glass windows lining its side, along with offices and 3 classrooms in the basement. (The stained glass window on the south end of the chapel has always been in the attic, out of sight from the chapel itself, although it matched the main windows.)
The podium was originally on the north end of the chapel, but they immediately knew the building was too small.
Here is a view of the original chapel, with its pulpit on the north end:
The building was remodeled in 1938; they changed the projection booth (they had originally planned being able to show pictures on the chapel wall) to an organ loft, flipped the podium to the south end, built a ballroom on the north end, and added a curtain so that it could be used for overflow.
In 1959 there was a major remodel. The stained glass windows in the chapel were replaced with clear glass--likely due to needed upkeep in the windows and a move toward modernism that was occurring in religious architecture. The building was greatly expanded at this time, adding a second chapel on the east end (that largely matched the first from the exterior). The building also had additions in 1990 and 1994. 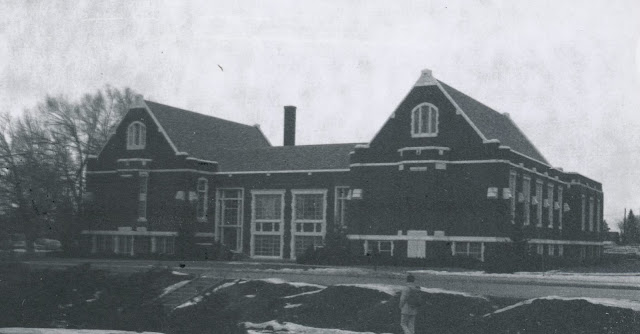 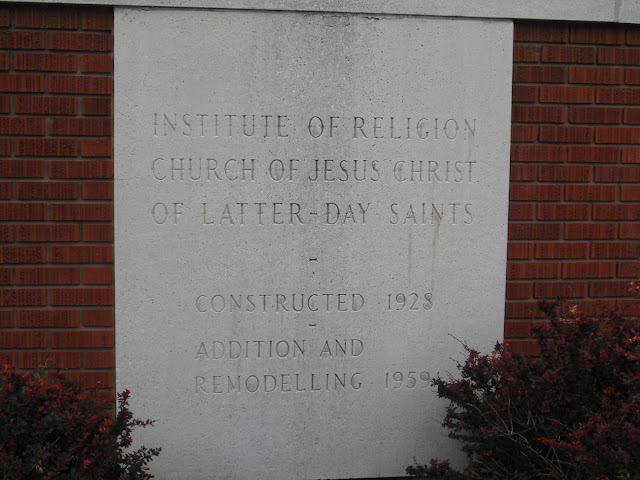 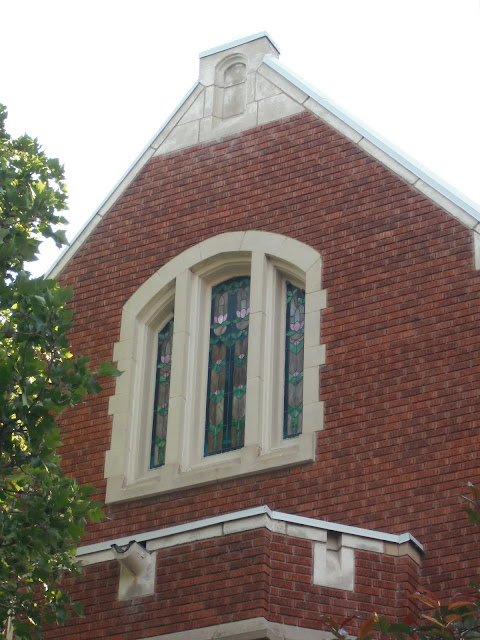 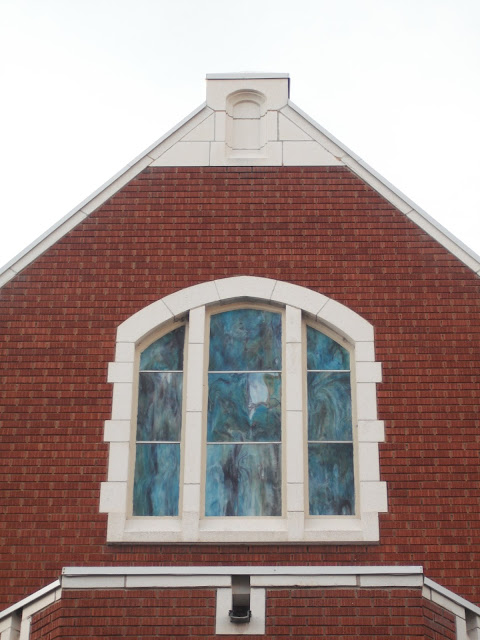 After 93 years of use, the Logan Institute Building--the oldest standing institute building in the Church--has been vacated and will soon be demolished and replaced. The Church has donated much of its pews and other furniture to local groups and churches; the original stained glass window in the chapel attic will be preserved.

I'm updating the post on the Logan Institute with more original photos and floor plans and will post that next week.

The historic Portland Stake Tabernacle was put up for sale last summer, but it has still not been sold--mostly because of the complications of it being a historic landmark. Another Church spokesman said that it's not for sale at this time. 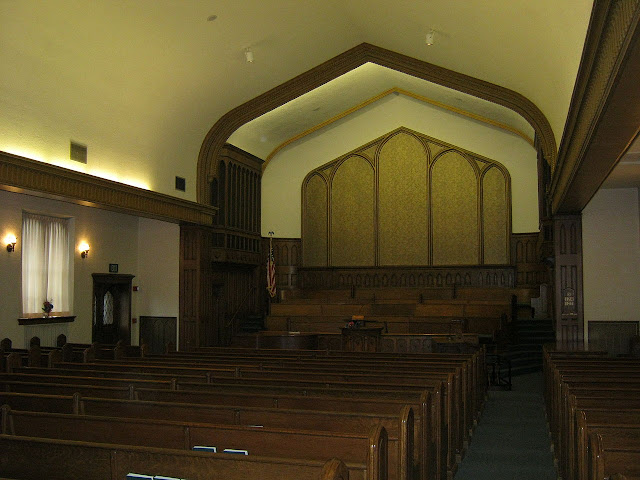 However, I don't think any of the plans have changed surrounding this building. The fact is that the number of congregations in this area have shrunk significantly, and the Church simply doesn't have use for the building.

The LDS Church isn't the only one impacted by shrinking membership in some areas. The Salt Lake City's First Congregational Church is selling their building, and the Church is purchasing their stained glass window for use in a temple.

The Church's use of historic stained glass windows from other churches is just one indication of how, currently, the LDS Church is one of the leading churches in terms of the use and preservation of art--and maybe even architecture. This may sound hard to believe among some preservationist groups, but I think very few Churches have the financial and administrative support to do as much preservation--and commissioning of new art--as the Church is currently doing. I find this to be a great trend, and I'm excited to see where the Church goes with this in the future.

The Lehi 3rd Ward's original rectangular block meetinghouse was built in 1894. The foundation came from the nearby Lake Mountains, and the building itself is mostly Victorian Gothic with arched windows and brick corbeling. The foyer on the building's west entrnace was added in 1936. 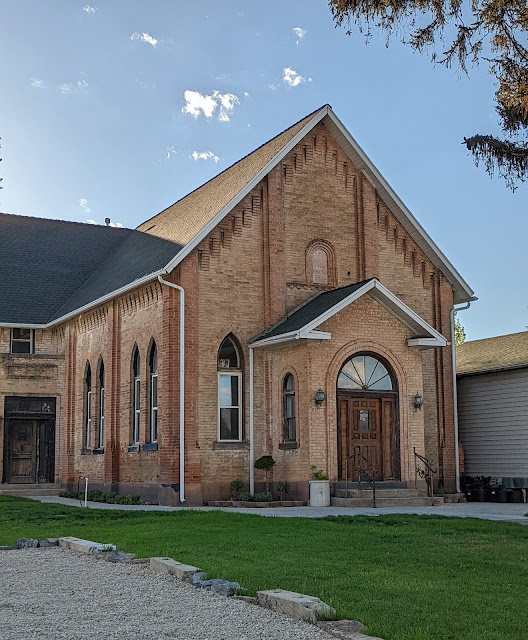 In 1917, a cross-wing addition was built onto the back. 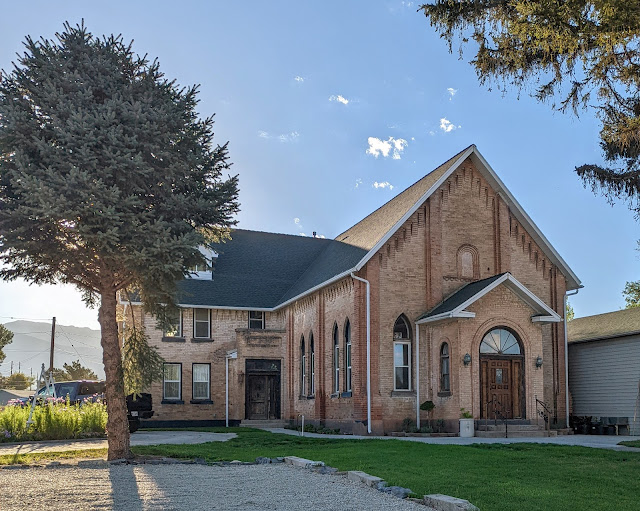 The building was sold in 1953. Subsequent owners have taken great care to restore the building, since it had deteriorated over much of the late 20th century. It is now owned by a local store, Jami Ray Vintage. Here is the interior looking west while they were still preparing the building:

And here is what it looks like now, looking east: