This is a long post. I apologize in advance. I am going to go through the interior of the Logan Temple, talk about the reasons for its being gutted and renovated, and discuss the possibility of it being restored in the future.

As with my temple posts on Salt Lake, Manti, and St. George, I decided to make a post on the interior of the Logan Temple because I have some images that I don't think are online at all, and others that are online, but my copies may be higher quality. Because this is a blog on historic Mormon architecture, I will only focus on the Logan Temple as it was before its renovation in 1976. The images comes from The Logan Temple Centennial Commemoration.

This is the floor plan of the main floors of the temple, as it was. It's hard to say what floor this is, because participants in the endowment session began on the first floor and ended on the third. On this map, North is to the left, and East is upward. 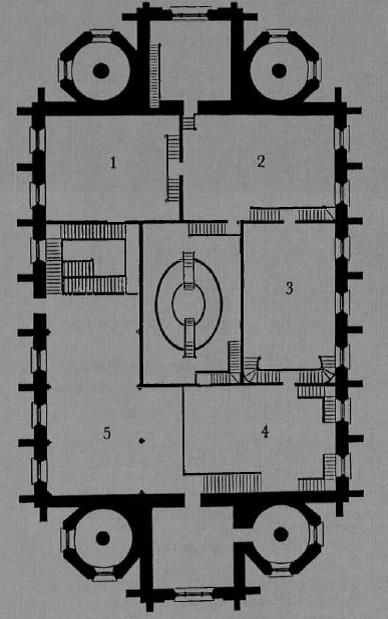 Participants entered in through the annex (see the small hole in the wall on the left side of the picture) and ascended this staircase. It's also the staircase they took when they exited the celestial room two floors up. It used to be a spiral one, until a devastating fire in 1917 necessitated a replacement. 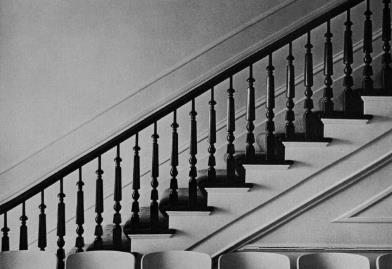 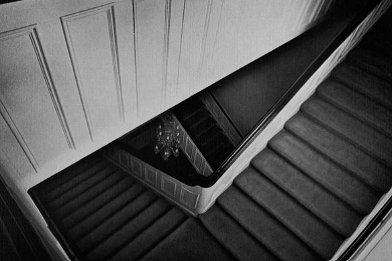 They then turned off to the left and entered the creation room. Here's looking toward the back of the room: 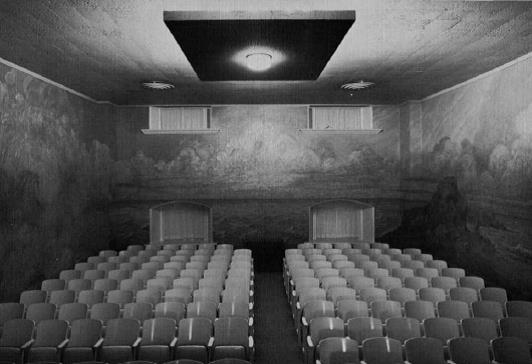 And the front. So participants entered in through the white door on the right. 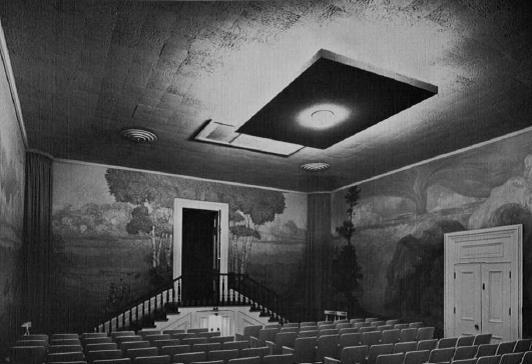 They then ascend into the garden room: 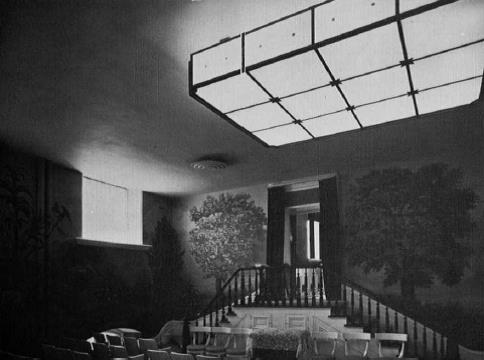 In the floor plan, you'll notice that there is a door and small staircase connecting the garden and baptistry rooms. This is accurate; it was added to the temple in a 1916 renovation. The reason for such a door is beyond me. 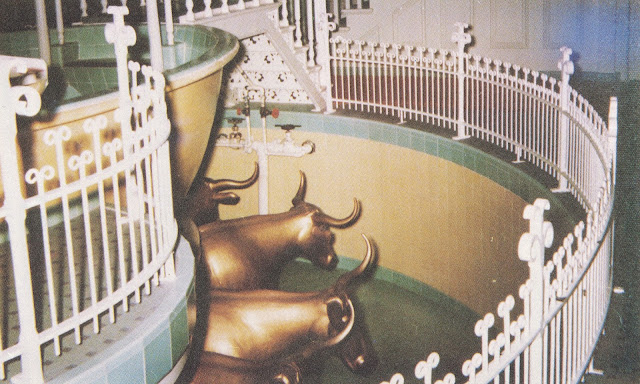 You'll notice the seat in the font--up until the 1960s or 1970s, most temple fonts had this, so that one person could be baptized while another was confirmed. Then they'd switch places. 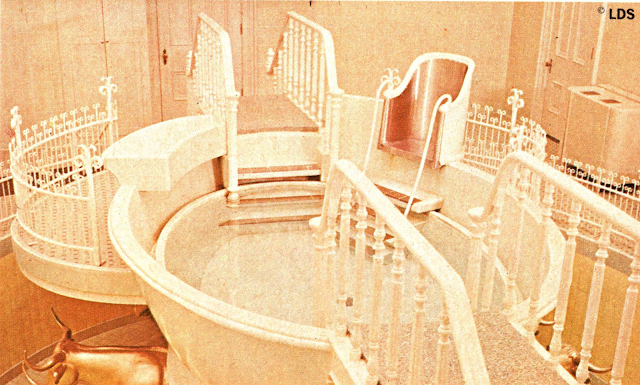 The garden room's mural was painted directly on the wall and could not be saved in the 1970s renovation. Fortunately, the creation and world room murals were preserved, and are in Church storage. 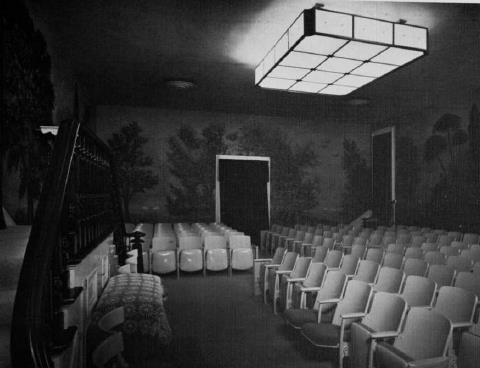 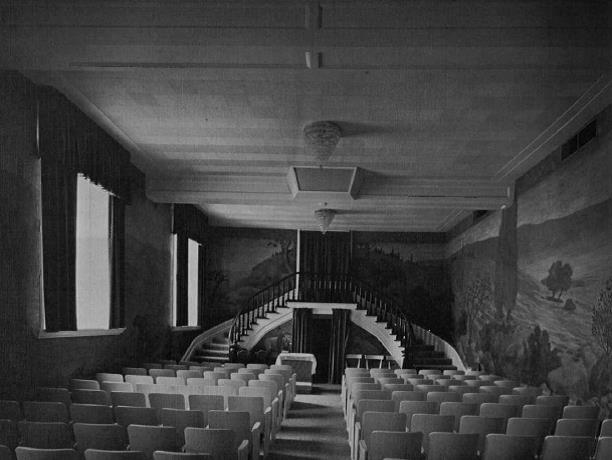 Next was the terrestrial room, with the veil into the celestial room at an elevated level. 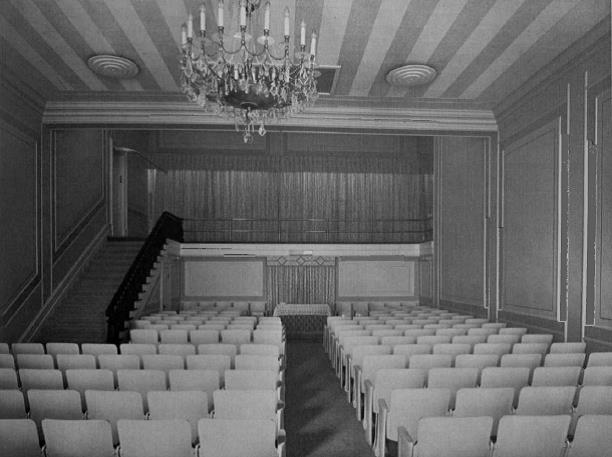 At the end of the hallway that houses the veil is this portrait of Christ. At the bottom are the words, "Blessed are the pure in heart for they shall see God." This is beautiful and appropriate for patrons who are about to enter the celestial room. The painting is now housed in the annex lobby, and all patrons view it as they enter the temple.

This photo really doesn't do the painting justice. It's huge--probably about 15 feet tall--and Christ is wearing pink and blue (which sounds weird, but it looks beautiful). In the corner is the note: "Wm Armitage; Dan Weggeland, 1897." Both of these men are well-known artists who joined the Church; both contributed to murals in this and other temples. I'm not sure if Armitage painted this, and Weggeland touched it up, or if they both painted it--I'd love to know the story.

UPDATE: I found some information on this painting. It was originally painted by William Armitage in 1883. Dan Weggeland, who was also in Logan to provide art for the temple, was so impressed with the painting that he duplicated it in 1897. In the 1917 fire, Armitage's painting was completely destroyed, so the temple purchased the Weggeland painting to replace it. 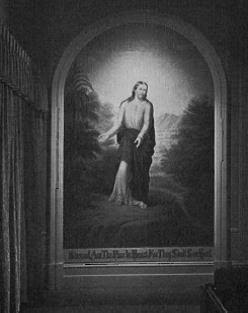 Patrons then come into the large, rectangular celestial room. It did not have the two murals originally, but they were painted by J. Leo Fairbanks and added in 1929. The one on the west (below) shows John the Baptist giving the Aaronic Priesthood to Joseph Smith and Oliver Cowdery; the one on the east end (see below this one) is Joseph Smith with the plates at the Hill Cumorah. 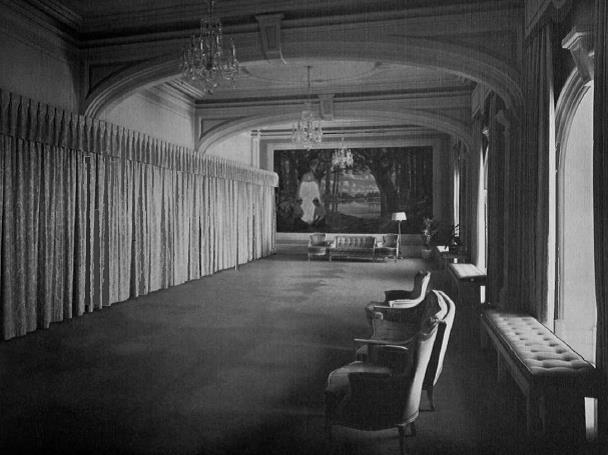 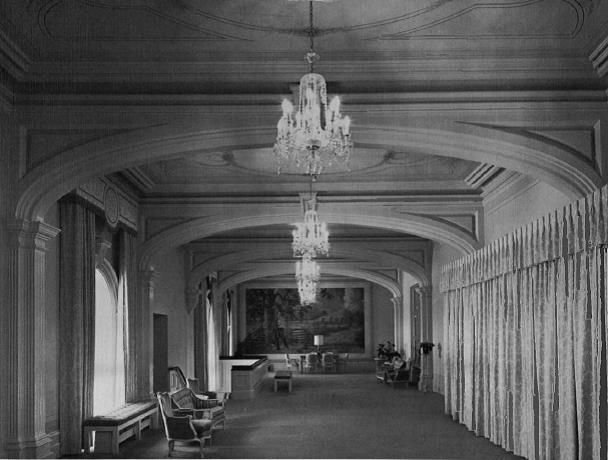 Update: I found some close-up pictures of the murals! They're not as high-quality as I would like, but I'll take what I can get: 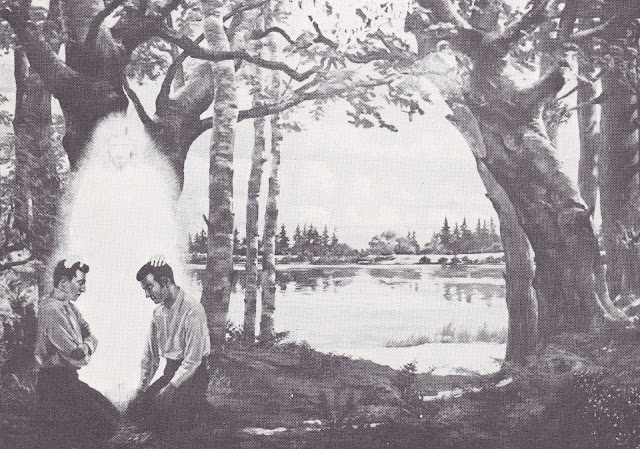 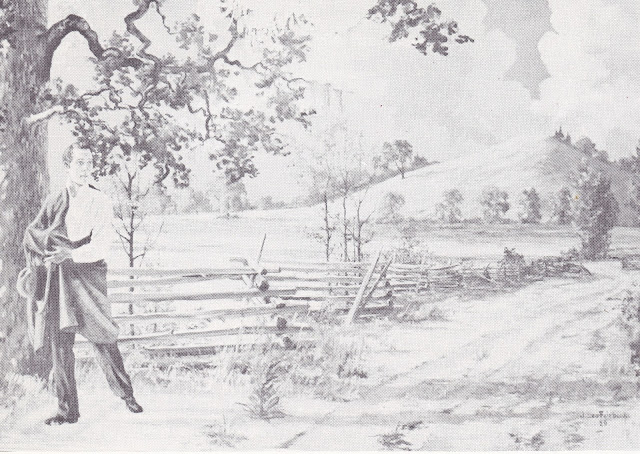 There were also beautiful sealing rooms in the original temple. This one is the gold room, which functioned as the Holy of Holies. The curtain on the left leads to the southeast spiral staircase. 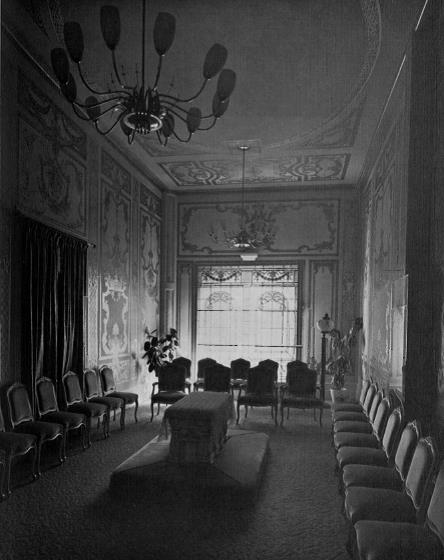 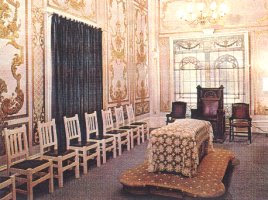 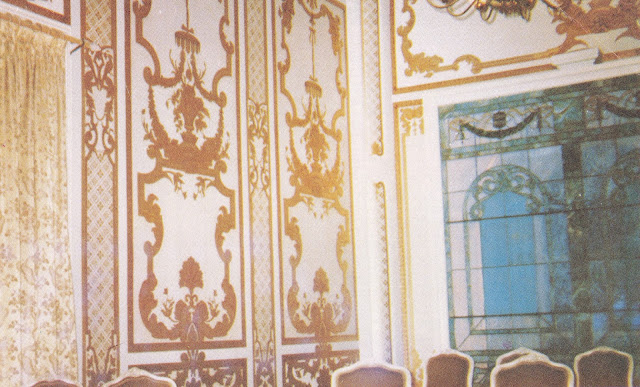 In case you are unconvinced about how detailed this room was, here's another picture, taken when some men were repairing the room after a fire. The details are stunning. 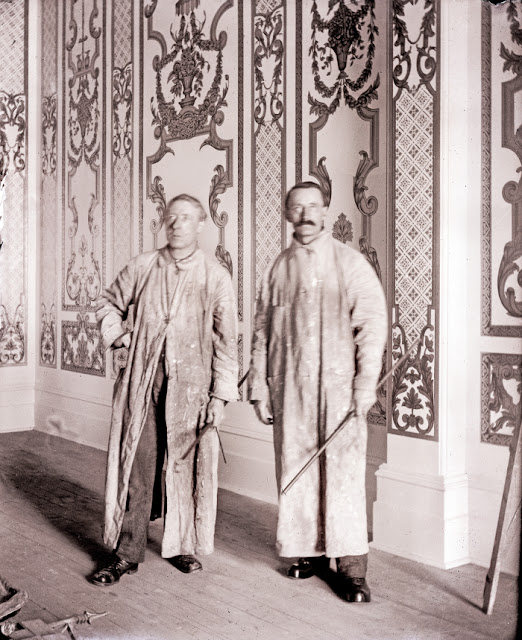 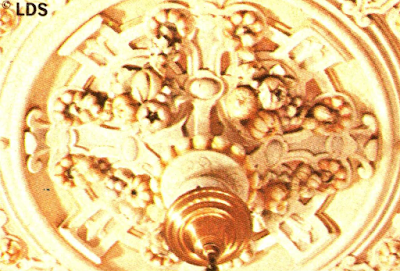 This was the Presidents Sealing Room (not sure if it had that name for a reason): 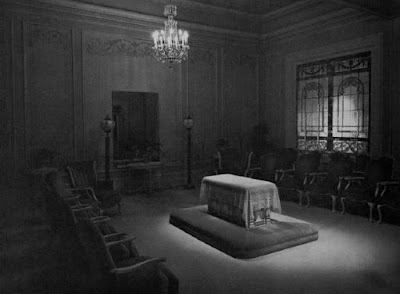 And even the regular sealing rooms were beautiful. This is one in the southeast tower. Simple, circular, with a beautiful view. 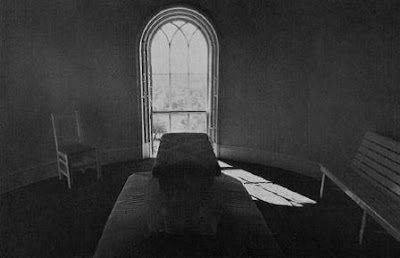 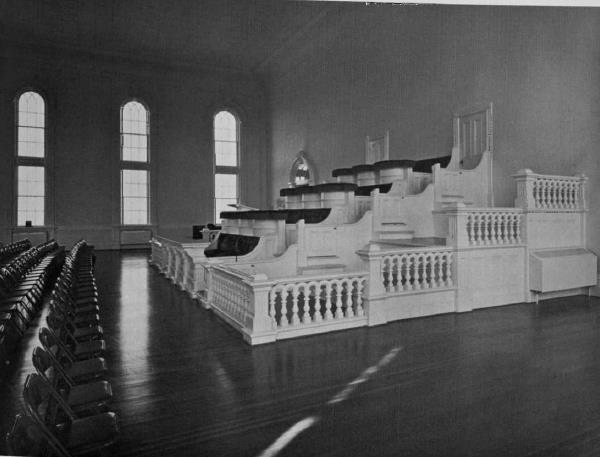 And the view of the staircases on the corner towers from the assembly hall: 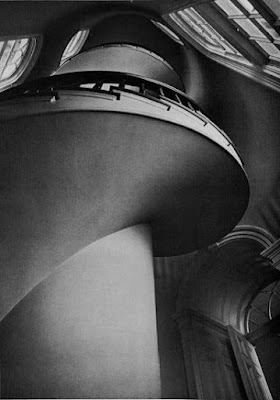 This temple was stunning. It was one of the oldest temples built. And in 1976, it was gutted and rebuilt on the inside. Which leads to the question: Why renovate it so drastically?

We can get glimpses of this answer in some histories. In 1959, when President O. McKay was president, David O. McKay noted that "the Logan and Salt Lake Temples are very busy, and are usually crowded...some of the people have been obliged to wait three hours for an opportunity to go through the Temple when they go to Logan or to Salt Lake" (Prince and Wright, David O. McKay and the Rise of Modern Mormonism, 268).

A three hour wait time is not pretty. But President McKay was still waffling on the idea of building a new temple in Ogden, saying that "there are many places in greater need of a temple...no doubt the crowded conditions reported in [Logan]...can probably be overcome by introducing the new procedures," i.e., the film presentation of the endowment (Ibid).

But of course, the Ogden Temple was built and dedicated in 1972, just over a decade later. Apparently, this did not remedy the problem in Logan, because in 1974, Emil Fetzer (Church architect) was asked by the First Presidency "to propose plans for remodeling the Logan Temple...so that films could be shown as part of the endowment ceremony" (Kimball, Lengthen Your Stride: The Presidency of Spencer W. Kimball, working draft, Ch. 35 p. 22).

The source continues: "Over weeks, [Fetzer] failed to conceive a suitable plan. Finally he considered the radical solution of removing all the interior divisions, leaving only the exterior walls and the fourth floor assembly room. Freed from constraints of the earlier arrangement of space, he quickly came up with a practical plan. When in February 1975 he presented it to the Presidency and others they appeared dismayed at the drastic proposal and took it under advisement" (Ibid). (I'm glad to see that there was at least some hesitation.)

"Late summer [1975], Fetzer happened to meet with President Kimball. They chatted and [Kimball] asked how he was coming with the Logan temple remodeling. Fetzer reminded him that the proposal was under advisement. Spencer said, "Yes, I remember now. We must arrange to meet with you again on this...it is imperative to have this work go forward as soon as possible." Approval followed in August [1975]" (Kimball, Lengthen Your Stride, Ch. 35 p. 23).

The record goes on to note that the building's footings were in sore need of retrenchment, which Fetzer arranged. Also, Fetzer did not plan to demolish the assembly hall level, but it also had structural defects that apparently required that level to be demolished. The roof also had problems that required it to be removed: 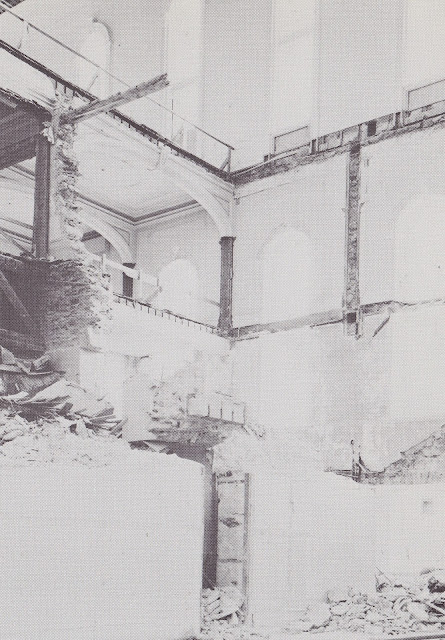 "Everything but the exterior walls and the four corner towers was gone. As Fetzer for the first time stood in the dirt of the basement level and looked up to see open sky through the skeleton roof trusses, he says, '"I was horribly shocked, . . . shaken at the boldness and audacity that I had in proposing such an extreme and drastic manner for changing a temple...yet, I knew that it was right"" (Ibid). 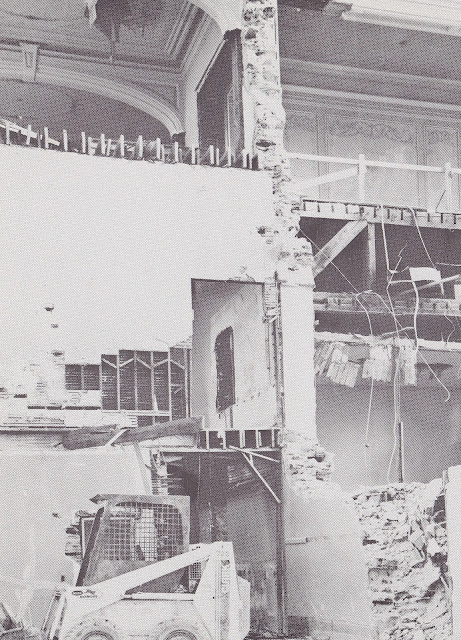 Of course, one thing is evident from all of this: some type of remodel was needed. This rebuilding method increased the temple's capacity by 75 percent (Lynne Hollstein, "Tours begin in Logan Temple," Deseret News, Feb 10, 1979). And a lot of leaders were apparently just fine with this type of renovation. When complaints came from the National Register of Historic Places (of which the temple was a part), a regional representative of the Church responded, "Personally, I don't see any difference on way or another. The temple serves a religious purpose whether it's an historical site or not" ("Historical register status or not, Logan Temple will serve function," Deseret News, May 7 1979). 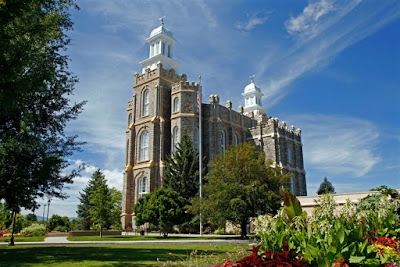 That is not to say that nobody cared. Presidents Kimball and Benson are both reported to have expressed regret about the remodel, even while they said it was necessary. A more sensitive remodel would have been more expensive, taken longer, and not as efficient as the gutting was--but, in the minds of many preservationists, it would have been better.

The next question usually is, Will the temple be remodeled/restored? I believe that it will, but it's hard to say when, for a few reasons:
I don't think the Church would make the temple exactly as it was (though it would be nice!), but they could change the endowment session to be progressive, return/redo the murals and other historical artifacts of the temple, and bring back the stained glass that used to grace the sealing rooms (and the gold on the walls of the gold room wouldn't be bad, either!). The current annex doesn't really go well with the temple proper, but I'd be willing to bear it for a restored interior. If it happens--when it does--it will be fantastic. It will be a true tribute to our pioneer ancestors and their works, and an implicit agreement that architecture has a tremendous effect on our spirits, our worship, and our lives.

Welcome to the Historic LDS Architecture blog! This blog studies significant architecture in the Church of Jesus Christ of Latter-day Saints (also known as the Church of Jesus Christ, LDS, or Mormon Church). This includes temples, tabernacles, meetinghouses, and other buildings. Buildings that have been documented are listed below. For more information on the types of posts featured here, see more about this blog.
Please ask for permission before using any photos. Feel free to contact me (see form below) with any questions, suggestions, or submissions related to Mormon Architecture. I'd love to hear from you!

This blog is updated every Sunday.